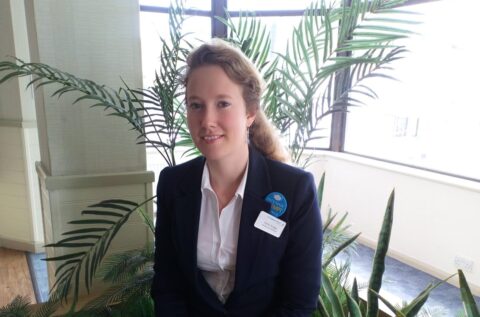 Hollie Joined TLH Leisure Resort as a colleague in March 2018 after completing the ‘Get into’ Hospitality programme which was hosted by TLH, in conjunction with the Prince’s Trust. Hollie made a real impression on the programme and worked hard in all areas of the business.

After the programme Hollie started working in the hotels’ restaurants where she proved to be a real asset. Before long she took on the role of Restaurant Supervisor in the TLH Carlton Hotel.

Recently Hollie has been promoted to Restaurant Manager and the team are extremely proud of her determination, commitment and effort that she has applied to learning about the industry. She has become a real shinning light amongst our guests and staff alike.

Hollie is now studying for her NVQ level Hospitality Supervisor Qualification and is looking forward to her new role as part of the TLH Management team. She is already showing signs of being an accomplished manager and no doubt will go far within the industry.

Hollie has shown that with the right support there is a clear and rewarding career path within hospitality.