Bowling has been around for years and spans all continents and nations. Here are 10 fun facts you may have never heard before about 10-pin bowling.

On 1 January 1840, Knickerbocker Alleys in New York City opened, becoming the first indoor bowling alley. In 1846, the oldest surviving bowling lanes in the United States were built as part of Roseland Cottage, the summer estate of Henry Chandler Bowen (1831-1896) in Woodstock, Connecticut.

Nine-pins was the most popular form of bowling in much of the United States from colonial times until the 1830s, when several cities in the United States banned nine-pin bowling out of moral panic over the supposed destruction of the work ethic, gambling, and organized crime. Tenpin bowling is said to have been invented in order to meet the letter of these laws, even with evidence of outdoor bowling games in 1810 England being bowled with ten pins set in an equilateral triangle as is done today in tenpin bowling. 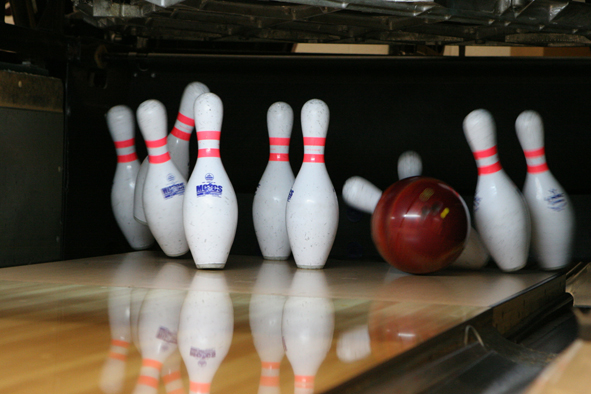 A bowling lane is 18,2 meters (around 60 feet) long from the foul line to the headpin. Bowling lanes can be made of wood, wood with overlays or synthetic material. All lanes require oil to be applied to a portion of the lane to protect the lane surface from the friction of the bowling ball.

Most of the bowling players in the world can be found in the USA. The United States Bowling Congress (USBC) currently has more than 2.5 million members.

Guinness World Records confirms that the largest bowling center in the world is Inazawa Grand Bowl in Japan, featuring 116 consecutive Brunswick Bowling wooden lanes on a single floor, which are being replaced and upgraded with Brunswick Pro Lane™ synthetic lanes in early 2010.

The Professional Bowlers Association (PBA) is the major sanctioning body for the sport of professional ten-pin bowling in the United States. Headquartered in Chicago, Illinois, the PBA membership consists of over 3,000 members worldwide. Walter Ray Williams Jr. is the most successful bowler in the history of the sport. In addition to having the most PBA Championships of all time, he holds the record for most PBA Player of the Year Awards, as well.

Bowling is the number one participation sport in America and the US bowling market alone is a $6 billion per year industry.

The first 300 game in a televised PBA event was rolled by Jack Biondolillo in the opening match of the 1967 Firestone Tournament of Champions finals (broadcast by ABC). This was also the first nationally televised broadcast of a perfect game.

The origins of bowling can be traced about 4,000 years back to Rome and Greece. However, modern bowling has some of its roots in old German religious ceremonies, where a pin was placed at the end of a long lane and was then tried to be knocked over by rolling a rock towards the pin. If the pin was knocked over, their sins were absolved.

Our bowling lanes are now open at Aztec Games. You can also enjoy Bowl ‘n’ Dine – Bowl in Aztec Games and eat in Alberts.