For many, a holiday in Torquay means a visit to the beach. Torquay and the surrounding area has a number of great beaches to suit all tastes. Some of the best beaches in Torquay are just a short drive or walk away from TLH Leisure Resort.

From rocky beaches to flat, fine sandy beaches, there’s some great beaches to chose from. Let’s take a look at just a few of the main beaches in Torquay within easy reach of TLH Leisure Resort.

Torre Abbey Sands, one of the best beaches in Torquay

The main beach in Torquay is called Torre Abbey Sands and named after the Abbey that sits just inland from the beach. For families on holiday in Torquay this is the beach to head for. Easy access at a number of points including 2 slopes that allow wheelchair and buggy access. With flat soft sand at low tide and numerous rock pools at the Corbyn Head end of the beach, Torre Abbey beach is one of the best Beaches in Torquay.

Type – Fine sand with rocks at one end.
Access – Multiple points of access with 2 being slopes.
Facilities – Multiple facilities including cafes, chips shops and ice-cream sellers.
Parking – Limited time paid parking along the sea road or via paid car parks.

Look out for our blog on Torre Abbey beach as we will be taking a closer look at this great Torquay beach.

If you’re looking to get away from the main beach at Torquay then Meadfoot beach is a great alternative. Only a five minute drive from the hotels at TLH Leisure Resort, Meadfoot beach offers something a little different.

Mostly rocky in nature, there’s a more sandy area at one end of the beach that can be a real sun trap. It’s an ideal place to set up camp for the day, enjoy the sun and explore the many rock pools. This particular beach is also great for fishing from the headland and can be fantastic for snorkeling. Be aware that at high tide this beach can be totally covered, so check the tide times before you go.

Access is via some steps and a slope at the sandy end and a slope that leads to the rocky end of the beach near the paid car park. There’s also some stone steps half way along the beach but these are steep.

Parking at Meadfoot beach is the best of any of the beaches in Torquay as there’s free parking right along the main beach road. There’s also parking via a small paid car park at one end of the beach and additional road parking in adjacent roads. All this parking is just minutes from the beach itself.

Look out for our blog coming soon as we take a closer look at Meadfoot beach in Torquay.

Type – Coarse sand with 50% of the beach being rocky.
Access – 3 points of access with 1 being a slope which leads onto the rocky end of the beach. The access via the steps can be steep.
Facilities – Small cafe on the beach.
Parking – Free parking along the sea road and adjacent road with a small paid car park and one end.

Look out for our blog on Meadfoot beach as we will be taking a closer look at this great Torquay beach soon.

If you fancy something a little different, then Oddicombe beach in Torquay certainly has a quirky method of getting to the beach.  The beach is located just below Babbacombe and just a 10 minute drive from TLH Leisure Resort. Parking is along the various road above the beach but spaces can be limited at times. 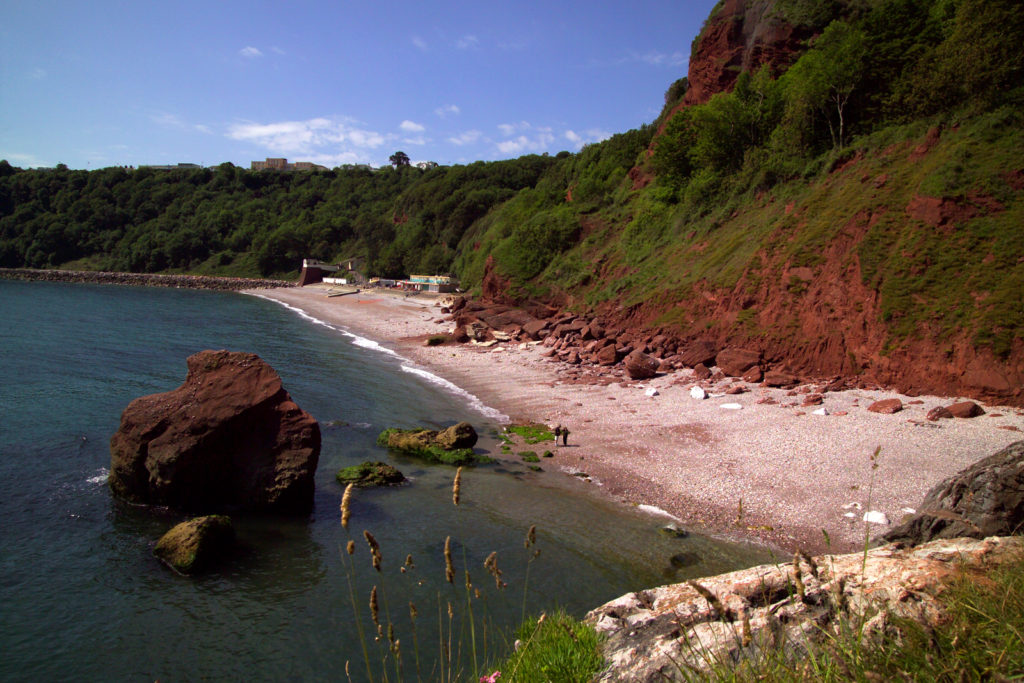 There’s a very steep road down to the beach which is out of bounds for cars (accept access) during the summer months. You can walk down this road to the beach but it’s very steep and the walk back up will certainly burn those calories. Oddicombe beach is the only beach in Torquay with its own cliff railway, but the kids will love it and it’s certainly a quirky way to get down to the beach. BABBACOMBE CLIFF RAILWAY >

Relatively flat and sandy, Oddicombe beach can be a real sun trap and look out for our blog all about Oddicombe beach, and it’s cliff railway coming soon.

Type – Coarse / fine sand with rocks at one end.
Access – 3 points of access with 1 being from a coast walk from Babbacombe, one via a very steep road and the cliff railway (there is a cost for using the cliff railway)
Facilities – Small cafe on the beach.
Parking – On street parking along the sea road above the beach but places can be limited.

Look out for our blog on Oddicombe beach and it’s cliff railway as we will be taking a closer look at this great Torquay beach soon.

Hollicombe beach in Torbay can be found on the way to Preston along the coast road from Torquay and is only a five minute drive from the TLH Leisure Resort Hotels. Parking is limited to the road side and the spaces can fill up quickly. Once there, access to the beach is very easy via a park with a slope to the beach. If you’re feeling a little more energetic you can walk to the beach in about 30 – 40 mins which can be a lovely walk along the coast road.

Entrance to the beach is through Hollicombe gardens, which can be found on the left, at the bottom of the hill, just before the road rises into Preston. With the beach being situated between Torquay and Paignton it can be a little quieter in the peak months.

The beach at Hollicombe is sand but slightly more coarse than that of Torre Abbey sands due to the cliff backdrop. There’s also a freshwater stream running through the centre which will amuse the children for hours!

Gently sloping and sandy, Hollicombe beach is a great choice but being slightly out of the way means there’s no cafe or ice-cream stall to hand, so be prepared to take everything with you.

Type – Coarse / fine sand with rocks at one end.
Access – 2 points of access with 1 being from a coastal path from the Paignton end. This includes some steep steps and the other via Hollicombe gardens on the coast road from Torquay. Access at this entrance is via a slope to the beach.
Facilities – None at time of writing this article.

Torquay and the surrounding coastline has some great beaches

TLH Leisure Resort is situated at the heart of torquay and some of the best beaches in Torquay are just a short drive or walk away. A trip to Torquay means a trip to the beach and enjoy your day. Don’t forget to let us know how your day at the beach went, as we would love to hear all about it.

Keep your eyes open as you never know what you might see along the beaches of Torquay and this looks like great fun!

More than just a hotel

Discover what makes us more than just a hotel...

Be inspired and try something different on one of our TLH Breaks. Whether you enjoy dancing, bowling or simply relaxing and being pampered, we have a short break just for you.

TLH Leisure Resort is the biggest leisure resort in the South West, boasting unrivalled leisure and entertainment, all year round! Explore what makes us more than just a hotel.

At the very heart of our hotels, Aztec Leisure includes our Aztec Spa, Gym, Studio, Pools, Games, and Bistro. Whether it’s family fun, relaxation, pampering or serious exercise you’re looking for, this is the place for you.