Torquay’s History as a Tourist Destination

The Torquay many of you know and love today started as the Saxon hamlet of Torre. The first signs of a settlement are noted in the Domesday Book. In 1196, a community of monks founded Torre Abbey. Prior to this, it is known that Roman soldiers visited the area, although never settled here. The story of how it became the bustling town in the heart of the English Riviera is a fascinating one.

For centuries, Torquay’s economy was based predominantly on fishing and agriculture. The monks of Torre Abbey had already built a fishing quay, hence the eventual name of Tor Quay (now Torquay) and it appears they continued to prosper in the area until the dissolution of the monasteries in 1539.

Torre Abbey and the surrounding land was bought by Sir George Cary in 1662 and remained with the family until 1929. The Cary family were prominent Torquinians and their name lives on in Cary Parade , the Cary Arms and Cary Park. They also owned most of the village of Cockington, known today as a picturesque country park and village.

Napoleonic Wars and Beyond

Torquay started to emerge as a holiday destination thanks in part to the Napoleonic Wars. The English elite suddenly found themselves unable to visit continental Europe so looked to the south coast of England instead. An early visitor to Torquay in 1794 is recorded as saying “Instead of the poor uncomfortable village we had expected, how great was our surprise at seeing a pretty range of neat new buildings, fitted up for summer visitors, visitors here can enjoy carriage rides, bathing, retirement and a most romantic situation.”

Visitors found our mild climate and beautiful scenery to be the perfect tonic to the grimy, grubby cities they were used to. Torquay started to attract visitors who were recovering from illness or surgery and convalescent homes sprung up offering patients access to the benefits of “healthful” air, calm, rest, light, food and exercise.

Torquay was really put on the map though with the advent of the railways. Torre Railway Station opened in December 1848. This improved transport connection led to a rapid growth in the town and its fortunes. One of the most influential decisions made at this time was to keep the railway to the edge of the town rather than taking it straight to the harbourside. This secured Torquay’s future as a tourist town rather than an industrial port. The rest, as they say, is history.

By the late 19th century Torquay was claiming to be the richest town in England and it continued its rise in popularity as a leisure destination. It is believed that TLH Leisure Resort’s own TLH Victoria Hotel was in fact the first purpose built hotel in Torquay in 1861. It was named the Victoria & Albert Hotel. You can read more about the history of the Victoria Hotel here. 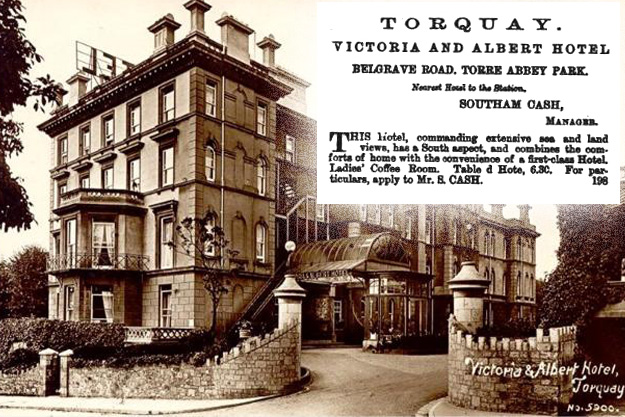 In 1902 Torquay introduced it’s very first advertising campaign to summer tourists and as the country became more prosperous, more people were able to travel to the resort for their annual summer break. This included an increasing number of working class who with the advent of cheap railway travel, were able to afford to come away. This changed the feel of the town, which had up until then been very much a place for the ‘genteel’ classes.

Tourism Into the 20th Century

As manufacturing industry took off, factories would give their workforce a two week break every summer and Torquay became used to catering for the Scots and the Midlanders who would came down for there allowed fortnight of fun and relaxation.

Torquay’s fortunes changed when the first package holiday to Spain took off in 1962. Suddenly there was fierce competition from hotter destinations and Torquay had to work harder to attract the same level of visitors. Tourism marketing really stepped up a gear. The 1970s and 80s however still saw a huge number of tourists each year and the town continued to thrive. he 1980s saw the start of a campaign to market the area as the ‘English Riviera’, a name which is well established today.

Things changed again when low cost airlines became predominant and since the 1990s, Torquay has had yet more competition form abroad. The town cannot afford to be left behind and has recently seen new developments such as Abbey Crescent, bustling with restaurants and cafes. There are new offices, shops and a hotel being built in Torwood Street and there has been a surge of independent bars and restaurants opening up.

Torquay is very much still on the map as an all year round place to visit and the latest campaign centres around the natural beauty of the English Riviera. The future of Torquay looks good and we look forward to welcoming many more visitors to its beautiful shores.

Find our more about TLH Leisure Resort and its 4 hotels, located in the heart of the English Riviera.

Be inspired and try something different on one of our TLH Breaks. Whether you enjoy dancing, bowling or simply relaxing and being pampered, we have a short break just for you.

TLH Leisure Resort is the biggest leisure resort in the South West, boasting unrivalled leisure and entertainment, all year round! Explore what makes us more than just a hotel.

At the very heart of our hotels, Aztec Leisure includes our Aztec Spa, Gym, Studio, Pools, Games, and Bistro. Whether it’s family fun, relaxation, pampering or serious exercise you’re looking for, this is the place for you.