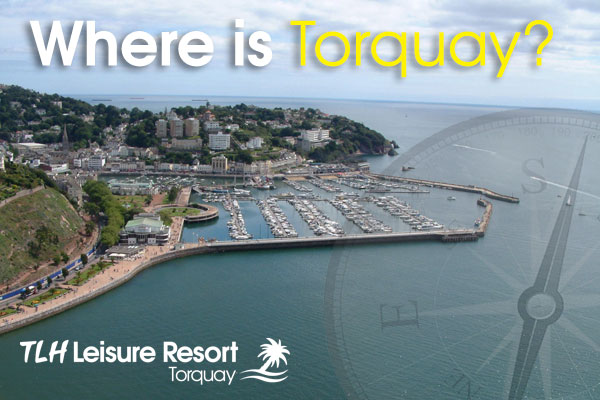 Many of you who have visited us before will already know how to get to Torquay and know that it is the heart of the English Riviera. To those of you that haven’t been here before but have heard how great we are, you’ll be wondering… where is Torquay?

Not only where, but why is Torquay a regular on Trip Advisor’s Travelers Choice – Top 10 UK destinations? Here I’ll explain where we are and what’s so great about Torquay.

Torquay is situated on the southwestern coast of England, forming one third of Torbay, on the western side of the bay. It lies 18 miles (29 km) south of the county town of Exeter and 28 miles (45 km) east-north-east of Plymouth, on the north of Tor Bay, adjoining the neighbouring town of Paignton on the west of the bay and across from the fishing port of Brixham. It has a mild microclimate, receiving among the longest hours of sunlight per day in the south west of the United Kingdom, with winters that tend to be mild and wet.

Where does Torquay get its name from?

The three towns of Torquay, Paignton and Brixham are also known collectively as Torbay. It consists of 62.87 square kilometres (24.27 sq mi) of land, located around an east-facing natural harbour on the English Channel. The local tourism authorities call it the “English Riviera” and align it with its French counterparts, on account of its beaches and mild climate. Torquay’s name originates in its being the quay of the ancient village of Torre. In turn, Torre takes its name from the tor, thus giving the original name of Torrequay, then Torkay, Torkey and Tor Quay before joining the words together to Torquay.

Whether arriving on train, plane or automobile, we’re not hard to find. Here are some directions to help you find us:

By road: Torquay is connected to the UK motorway network via the M5 at Exeter and onto the A38. The newly completed South Devon Highway connects the Torbay area to the A38. This new link road is a 5.5km dual carriageway, providing the long awaited bypass for Kingskerswell. The road bypasses the former A380 between Newton Abbot and Torbay and now makes coming to Torquay by car, a breeze in comparison to life before the bypass.

By Rail: Torquay has two railway stations. Torquay railway station is situated near the sea, close to Torre Abbey Sands. Torre railway station is situated a little inland adjacent to the road leading to Newton Abbot. Trains travel directly to Torquay from London Paddington, Birmingham New Street, Bristol and Manchester Piccadilly with no changes. The route also takes in the fantastic Riviera Line which offers great scenic train journeys along the South Devon coast between Exeter and Paignton. See a full timetable at www.gwr.com

By Air: Torquay doesn’t have an airport of its own. There are three airports within 100 miles of Torquay that you can fly to, however. The nearest is Exeter Airport, which is 26 miles (40 minutes’ drive) from Torquay town centre.

Why so many visitors?

Torquay and the English Riviera have so much to offer and with statistics from 2013 showing over 1.7 million day visits during that year with an estimated 646,000 visitors who stayed in the area, the draw to this traditional British seaside resort can’t be disputed. Set at the very heart of the English Riviera on the South Devon Coast, Torquay is famous for its sandy beaches, family attractions and genteel Victorian appearance. Torbay is distinctly Mediterranean and is a family favourite with plenty of attractions and things to do. The main beaches of Torquay are Oddicombe Beach, Meadfoot Beach, Maidencombe, Watcombe, Babbacombe Beach, Anstey’s Cove, Redgate, Torre Abbey Sands, Corbyn Sands and Institute Beach and Hollacombe Beach. Read our blog on our favourite beaches in Torquay.

Torre Abbey Sands is the nearest beach to our resort. It’s perfect for a day in the sun, building sand castles, or why not enjoy a relaxing walk along the meandering seafront. This will lead you towards Torquay Harbour, where you can find a variety of restaurants, bars and pubs.

Cockington Village is from Torquay seafront. You can step back in time in this 2500 year old thatched village. A truly picturesque quintessentially English village, there has been a settlement at Cockington since Saxon times, with the earliest record being from 1086 in the Domesday Book.

Torquay was a relatively minor settlement until the mid 19th Century when the railway linked it to the rest of the UK. The improved transport connections saw Torquay expand rapidly to cater for the area’s popularity with the Victorian’s. Their desire to explore everything and everywhere, included the furthest flung corners of Britain. After the First World War, the Great Western Railway Company extensively promoted Torquay. This helped the town to become a major UK holiday resort.

Torquay’s a fabulous base to discover the delights of the English Riviera and what better than staying in a Torquay hotel.  At TLH Leisure Resort we’ve got four distinct hotels to choose from to suit all tastes and budgets for your Torquay holiday. Why not come and find out for yourself!